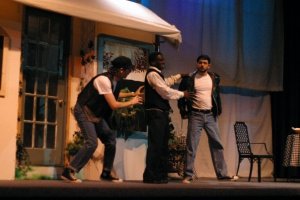 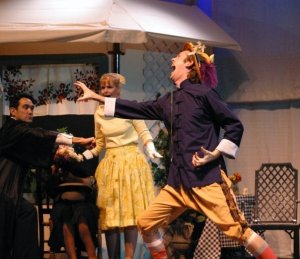 This production was done in 2008 at the Georgia center in Athens.  My first costuming gig with Rose of Athens.  Shrew was set in the early 1950’s.   The director wanted the look of the transition from the late 40’s …before the teen trend of the poodle skirt look.

My inspiration came from a Marlon Brando shot from the Wild One.

Straiter skirts, cheery colors for Bianca, drab darks for Kate.  Petruchio and Grumio wore the chucks, jeans and leather jacket/vest.   Sweater vests, ascot ties, hats, and suspenders for the other characters.  The wedding dress for Kate was made from scratch…a really pretty suit with 3/4 sleeves and a headband veil.  The most fun of this production was piecing together crazy outfits for Petruchio and Grumio’s wedding gear.  The idea was multicultural, so there were kimonos, indian pants, a kilt, an animal covered hat, a chinese worker shirt, mismatched shoes and socks, a cowboy boot, um….was that it?

This was a great and HUGE performance by Rose of Athens.   It was their first at the classic Morton Theater in downtown Athens, and for a cast of 12 or so…there were over 60 costumes!  The theme was classic Shakespearean dress with a sci-fi futuristic twist.   My collegue, Jennie Alvernez was the lead costumer, but with such an overload of designs and limited budget, I signed on to help out.  My main project was the witches.  7 total, but each one had to have at least 2 growing variations of red accents (as the play progressed, the characters fell deeper into evil madness).  The play turned out amazingly and I have to say the witches were my favorite part.  Choreography by Becca Woolbright and live percussion/spooky sounds by Patrick Ferguson made their dances eerily cool.  The hitch to the witches costumes was making long dresses that could be crouched, jumped, and crawled in….did I mention the ROA actors are a very active crew?  I did not get my own photos of the gowns in their finality, but here they are in action.

The close ups and more shots of the whole show are found here:

What I basically did was some repurposing of thrift store dresses!

Each of the 7 witches had to wear black tee shirt and leggings under their costumes for quick changes into soldier or other costumes (by quick, I mean less than a minute!).  I started with some plain black velvet long sleeve dresses, a few black hippie skirts and plain black skirts.  Each one got a bit of the sci fi aspect and the red accents with nifty additions like reversable red to redder leather corsets, sheer gauzy elastic red underskirts, or belts and little red accents.  I made most of these dance-able by slitting the sides to the upper thigh, or by slitting the whole skirt all around in some cases.   The belts and corsets all closed with heavy duty industrial velcro which made for easy on/off.   They all incorporated lots of black tulle and the main witch, Hecate featured Purple to signify her lead role. 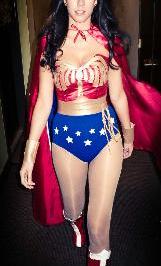 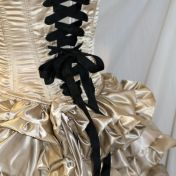 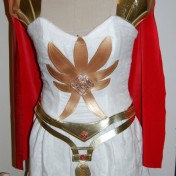